I have searched the internet for numbers and facts about population and religion. What I have found is the base for my vague idea about paradise.

The largest religion in the world is Christianity followed by Islam. They are both based on the belief that when you die, you will end up in a place called Paradise. To this crowd we can also add Jews and Jehovah’s witnesses.
Christianity is believed to have between 1.5 to 2.1 billion followers, Islam has 1.5 billion. Judaism and Jehovah’s Witnesses are collecting around 21 million followers between them. I think it’s safe to say that the number of people who believe in the idea of a gathering in paradise when you die is about 3 billion. Which is just below half of the worlds population today.
If we now take the average number of deaths each day (172 000) and divide by half, we find that 86 000 people go to heaven every day. Based on the current population.

According to the Bible the earth was created 6000 years ago. And since it was only populated by 2 persons back then we can not say that 86 000 bible followers has died every day since ”the beginning of time”. No, we need to make another average figure. Also remember the book of Genesis and the Flood that put back the population to almost zero.
I will for this reason, drastically cut that number in half. We now have this estimation: The number of people traveling to paradise every day is 42 000.

Where do I wanna go with all this?
Since there are very few reports on climate, size and comforts in the Garden of Eden, we can only speculate. Let’s presume it is very big. Let’s say it is the same size as our planet, minus the areas covered in water. That leaves us with an area of 148 940 000 000 square meters. A fairly big garden in my opinion.
But what happens when we take this gigantic figure and divide it with the number of angels who has stood before the gates of heaven since the dawn of time? 148 940 000 000 divided by 91 980 000 000 = 1.619265 m2
If you have lived your life faithful to your god. Payed all the fees and said all the prayers. Then I am pretty sure the expectations are quite high as you are about to enter into your paradise.
My conclusion is: (and my worry for those who believe that they end up in paradise) Wouldn’t it be quite disappointing to realize that the space you have for your disposal, is in fact, not larger than the coffin you were buried in. 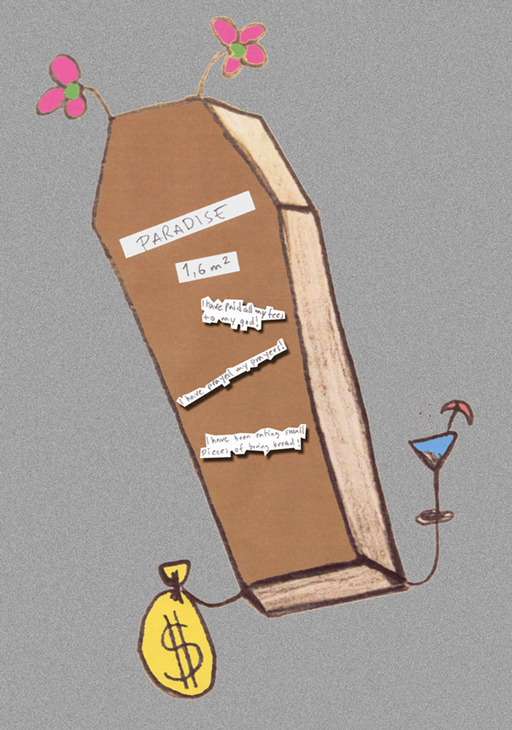 This entry was posted in About me... and tagged death, god, paradise, scepticism. Bookmark the permalink.