Last time I saw Paradise Lost was that time when Nick Holmes spoke the famous line: ”I´ve heard that Per Gessle from Roxette is here tonight. I fucking hope he paid for his ticket!”
I´ve laughed at that line for 12 years now. I have also thought about it as a symbol for unjustice. Why should Per get a free ticket just because he is a famous musician or happend to be on the same record label at the time? He should be able to pay for his ticket. Just like we had done. The fans. But mostly I´ve been laughing. And when I saw them again this week I was open and excited about Nick Holms chat between the songs. And he did deliver. He was cool and very brittish. It was obvious that their record company had asked them to push the new album and it was obvious that he didnt wanna push that too much on to the fans. He had a very relaxed approach to the whole thing and would scream out: ”Thank you Stockholm. Buy the… Eee, I forgot what to say now…”
That took the edge of the whole promotion idea and was very comfortable for us as audience. Everybody knows that they want to sell their album. And Im sure that at least 75% support them by buying it instead of downloading. i belive it is in the nature of a heavy metal fan to support the band and wanting to have the real deal. 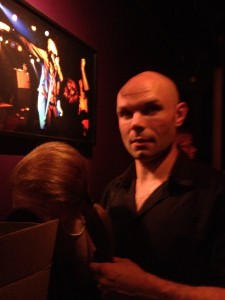 Carrying a box of headbanging hair with me.

The setlist was terrific. A good mix between new, old and in betweens (In betweens = I´m speaking purely time wise. No song is in between when it comes to quality. They have only good songs).
It was a very nostalgic evening. Memories rushed back to me. I have been a very loyal fan since 1991 when I heard the band the first time.But this post is not really about the concert. And it´s certainly not a review. It is about how it made me feel.

It made me very melancholic. But also very happy and proud about having supported a band really from their beginning. I consider them to be one of my all time favourite bands and I´m humble before the fact that I got to witness them live on stage one more time.
Maybe I wasnt the oldest person at the venue but I was for sure one of the more faithful fans.
Just before I went to the concert I stoped by my friend, the wig maker. Leaving there I was forced to carry a cardboard box with a fully equiped heavy metal haircut. That felt kind of ironic since I am, as you know, quite bald. It felt a little like I was there in a mature state of mind but carrying a part of my youth and childhood with me in that paper box. Just knowing that I had a complete headbanging setup with me in that box made me feel like a winner and a loser at the same time. It was not an unpleasant feeling. It was kind of reassuring since I was so sure about where I was regarding Paradise Lost. Their true and devoted fan since 21 years. Loved that feeling. Love Paradise Lost.

This entry was posted in About me..., Music and tagged concert, heavy metal, paradise lost. Bookmark the permalink.