Sit or stand. That’s the question.

I am about to question a human behaviour that have made me the laughingstock before when I have been bold enough to bring this issue to the surface.
I really don’t know why people have turned their back on me for this? My hope is to bring clarity in to this matter and also to raise other peoples voices. What do YOU think???
So, to the point.
Why do men stand up when they urinate?
Why? 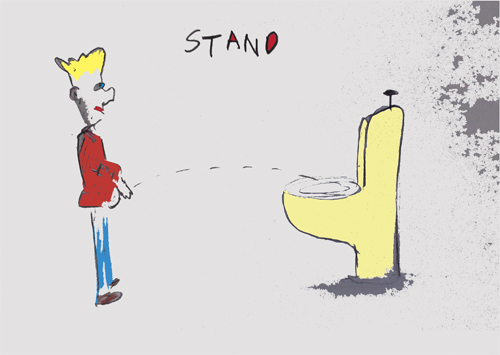 In my opinion, this is the most unhygienic thing you can do. There is no way you can get all your urine into the toilet bowl from that distance. Even if the distance may vary individually it is very hard to get that aim right. Especially towards the end of your session.
I wont go into much detail but I learned the hard way by breaking my own rule and urinated standing up on a public toilet last summer. (I do admit that I stand up if the toilet is dirty)
I was wearing short, summery trousers and flip-flops that day (misstake).
As I was doing my thing, standing up, I became aware of the fact that drops of fluid, when hitting porcelain, divides into millions of particles and bounces.
Urine is not toxic, but being a waste product, urine is compounds from the body that can be irritating when in contact with your skin and eyes. So, there I was with small wet particles of my body’s waste on my legs and feet. I made me feel bad.
And you don’t need to be a scientist to figure out that the same piss is gonna end up all over the floor around the toilet as well. Which of course, is disgusting! 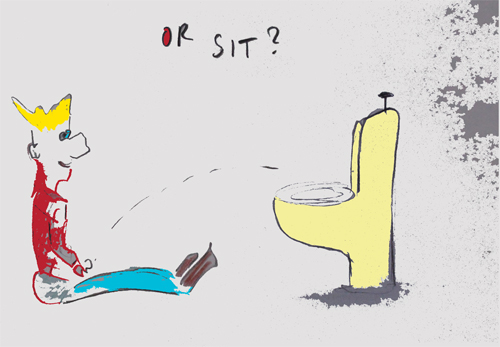 The second problem with this is the fact that it is generally easier to reach the toilet paper from a sitting position then from when you are facing the toilet. Also when sitting, you don’t have to worry about holding a penis which means that you have two hands free to take care of hygiene. I don’t know this for a fact, but I imagine that most people in a standing position probably decide not to wipe the last drop out. Just because it is so complicated standing up. That means you are going to end up with urine soaked IN your clothes as well.
Two pretty good reasons to sit down.

In the beginning of this text I explained a worry that I might get laughed at because of my opinion. I also told you that has been the case earlier.
I remember explaining my point to a friend once. He just couldn’t listen to it. He could not understand! Nor accept the fact that I was sitting down. He said it made me less of a man.
Does it?
One of the manliest man I know: My father, 2oo cm tall, 105 kg solid muscle and a hardworking father of at least 3, is also sitting down. He told me as a child:
“You either sit down on the toilet in this house, or you don’t use the toilet at all.”
There was my choice. Sit down or go outside!
The outside is not an option when its 20 degrees below zero most of the year. It became natural to me to sit down.
So why are men still insisting its “manly” to stand and piss when its nothing but unhygienic, disgusting and rather stupid?
That is my question to the world today.
Thank you for listening and don’t forget to wash your hands.
I’m pretty proud of my illustrations!

This entry was posted in About me... and tagged hygiene, sit or stand, urine. Bookmark the permalink.